<- back to IDS reporting

By Jessica Contrera
Photos by Anna Teeter
On the last morning, before the waffle irons went cold and the pictures came down, before the lock refused to lock, before the claw crashed through the roof, the old man paced.
Tap, tap, tap. Bud Powell’s aluminum cane led the way as he circled the floor of Bloomington’s Waffle House. His Waffle House.

That Wednesday in September, the owner didn’t know what to do with himself. The smell of frying oil, the same greasy perfume that had greeted customers for 46 years, wafted into his nose as he wandered past the vinyl booths. He sat down, then stood up again.

Bud — everyone called him Bud — checked on the dwindling supply of breakfast sausage, peered into the nearly empty freezers, tried to explain to his regulars why it had to be this way.

At 79, Bud was tired. Except for Christmas, the restaurant was always open, day and night. Now a developer wanted to replace it with another apartment building for college kids. The offer was too good to pass up.

“Where are we gonna eat?” the old-timers kept asking.

This had been his place for 16,767 mornings. None ever felt like this.

The weariness showed in his eyes, behind the wire rim glasses and in the hunch of his shoulders. After the Waffle House was torn down, he knew that he wouldn’t see most of his customers again.

Tap, tap, tap. Bud plodded past the grill, where the last of the eggs sizzled. The ever-dependable waitresses whizzed by, balancing plates, like today was no different.

Most of the students had stopped visiting years ago. The smoking ban forced out the puffers. Many of the regulars grew so old that they died or went to nursing homes.

Once Bud decided to close, it all slipped away even faster. Some of his staff had taken other jobs. The gumballs emptied out of the shiny red machine. No one bothered to mark the white board with the daily special.

They would close at precisely 3 p.m. Bud checked his watch, ignoring the broken wall clock, its hands frozen for more years than he could remember, stuck in time.

A week before the last day, the food was already running out.

Dr. Dick Leyda slid into a booth for a meal he ordered a few times a week – sandwich and soup. He kept it simple.

“Chicken salad sandwich, please,” he told Mary, who had been working there for 24 years.

Dr. Leyda settled for egg salad. He was one of the few people at the restaurant who wasn’t called by his first name. But mostly he’d be called “dear” or “honey” anyway.

A few years before, he had rarely been seen at the Waffle House, or anywhere else, without his wife Carole. When Carole started needing a walker to get around, they still came to the restaurant. She’d order French toast and bacon from Hootie, one of their favorite waitresses. Always French toast and bacon.

At home, Carole wasn’t so predictable. Without Dr. Leyda ever really noticing, his wife had begun filling up their children’s old bedrooms with newly bought items. Shoes still in their boxes, beautiful shirts and dresses from Talbots in the closet, never worn. Carole had never been a big shopper, and certainly not a hoarder.

“Dad,” said their daughter. “I think Mom is having problems.”

Carole was diagnosed with Alzheimer’s. Slowly, she forgot how to walk. When they went to Waffle House, Dr. Leyda brought a caregiver who could help her inside. Dr. Leyda read the menu out loud. Carole ordered French toast and bacon.

Then two years ago, Carole moved into Garden Villa, a senior center. She and her husband still ate together each morning, usually popsicles or chocolate bars. They sang together — ”Amazing Grace,” “God Bless America” and “A Bicycle Built for Two.” Carole used to sing with him. Now, she mouthed the words. He always kissed her goodbye, and she always kissed back, except for when she wasn’t ready for him to leave.

When Dr. Leyda drove away, he headed straight to the Waffle House.

Sometimes Dr. Leyda ate with Bud, sometimes with an insurance salesman, from whom he never bought insurance. Often he ate alone, but with so many waitresses who knew him, it wasn’t really like being alone at all. Today he sat with Rose Thomas, his neighbor on Covenanter Drive.
When she found out Waffle House was closing, Rose asked Bud if she could buy the restaurant’s dishware to donate it to her church. He told her she could have it for free.
*          *          *

On the final morning, Dr. Leyda kissed Carole goodbye at Garden Villa. He was pretty sure she understood he was headed to their old place.

“Well, this is gonna be the last time,” he said. She smiled.

He arrived at the restaurant to find Rose already inside. He had eggs, toast and ham. She had peach cobbler. Bud continued his circling, waiting for his watch to read 3 p.m.
For years he had sat in these booths, looking out the window and watching the world change in ways he never could have imagined. The A&W drive-in across the street, the bus station one lot over, the pizza shop next door — one by one, all of them had been knocked down to make way for more apartments for college students. Within a year, the new five-story apartment building would rise right where he was sitting now.

He glanced down at his watch again.

This is it, he thought. He helped himself to a heaping spoonful of cake. And a few more.

He looked up. Larry, the day’s manager, stood at the booth. After taping up handwritten “We are closed” signs, he had just spent five minutes fumbling at the door. The place hadn’t been closed since Christmas, and now the key wouldn’t turn. 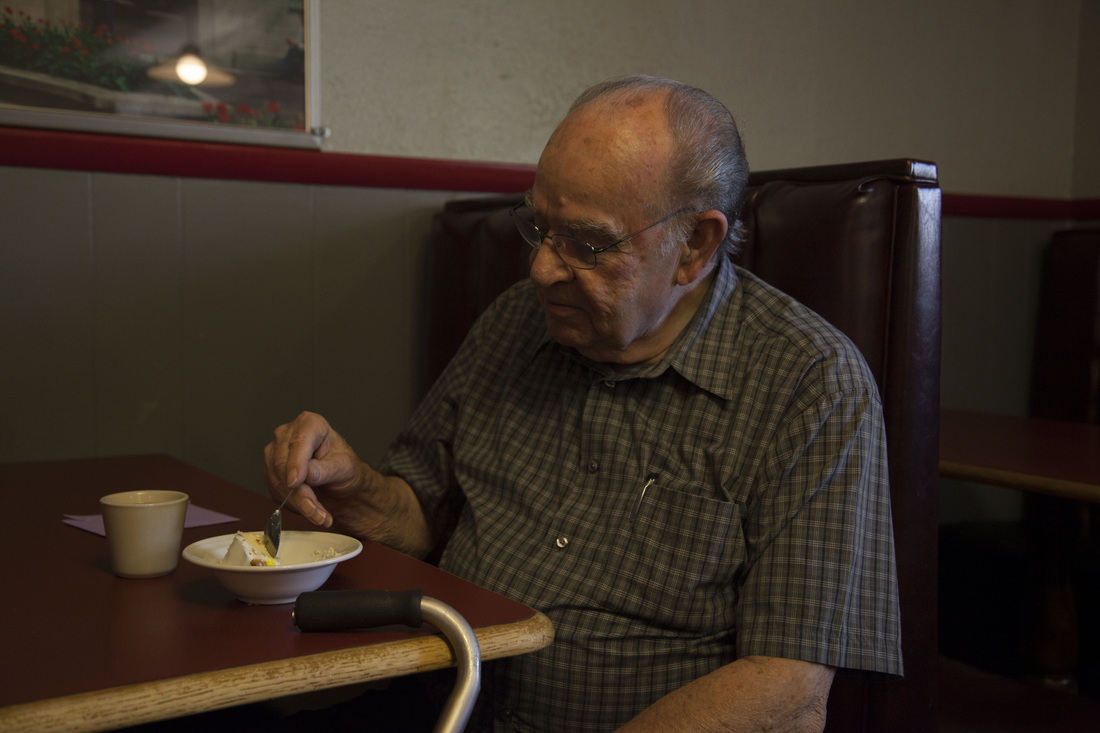 That evening, some volunteers from St. Charles Catholic Church helped Rose pick up the dishware. Once the boxes were unloaded, she stopped in a pew to pray. For Bud, for his wife Myra, for Stan.

By the time she reached home, she was already imagining the donated dishes gracing a proper after-church coffee gathering. Some people might think paper cups were acceptable, but she knew better.

She looked up at the framed portrait of her white-mustached husband in the corner.

The next morning, Dr. Leyda and Carole started the day with mini Hershey’s bars on the patio of Garden Villa. They watched the residents move slowly in and out of the rehab center doors. Some of the residents waved to Carole.

Dr. Leyda kissed her goodbye and pondered where to go next. Panera? Or Cheddar’s? McAlister’s? 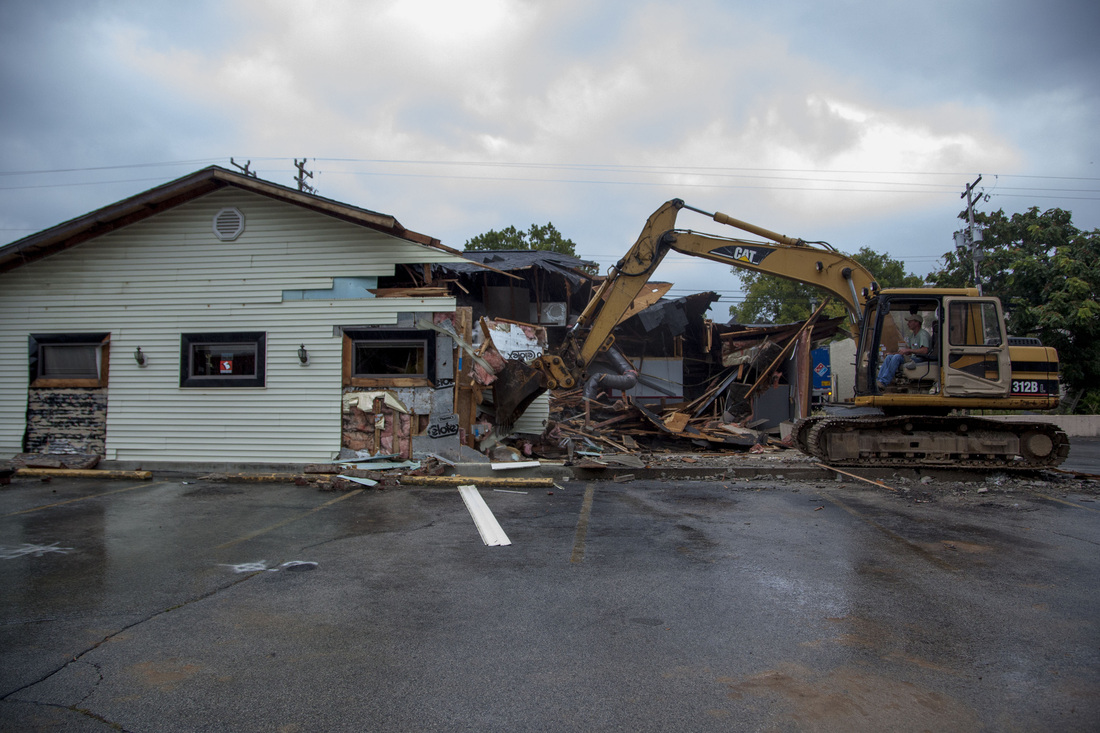 See how "A bittersweet end" ran in print here.
Read the story at idsnews.com here.
Hear an audio slideshow by Emma Grdina here.